Duffy & Ro blend the styles of Modern Country, Americana, and Traditional American Music into a mix of beautiful vocal harmonies and well constructed guitar duets, while bringing new life and a fresh perspective to tunes of yesteryear. Their music is sure to inspire and warm the heart of any listener.

Duffy & Ro have performed and entertained audiences with their music across many venues along the East Coast, from local music theaters and regional music festivals to restaurant/entertainment venues. 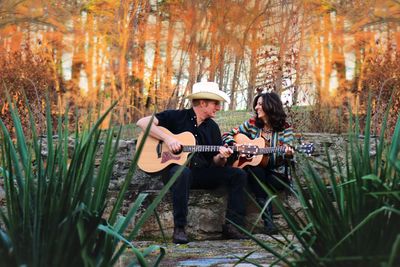 Duffy & Ro are currently in the studio, working on their upcoming album.  Stay tuned for more information as the project gets closer to its release date! Duffy Kane has recorded with Freedomtrain Records and released the CD "Deadman Walkin'" in 2015, which reached #8 on the Billboard Blues charts.

East Coast guitarist, Duffy Kane has toured the U.S. since 1987 and has been described as "An American original" of "International caliber." Kane is an American guitar stylist of exceptional ability.

Ro Kane, a multi-talented, gifted musician began her career at 15 years old as the lead singer of a premier mid-Atlantic showband, and after a 20 year stint began a career playing country music. Ro brings an accomplished, soulful, and dynamic vocal talent to the country music she was raised on and loves.